Knowing what misinformation is being shared can help you generate effective messaging.

These insights are based on a combination of automated media monitoring and manual review by public health data analysts. Media data are publicly available data from many sources, such as social media, broadcast television, newspapers and magazines, news websites, online video, blogs, and more. Analysts from the Public Good Projects triangulate this data along with other data from fact checking organizations and investigative sources to provide an accurate, but not exhaustive, list of currently circulating misinformation.

Alerts are categorized as high, medium, and low risk.

A recent study of 37 sperm donors found that the Pfizer COVID-19 vaccine caused a temporary decline in sperm count immediately after vaccination. The study was shared on a social media platform where it received over 17,000 engagements and 1,500 replies in three days. Some responses expressed concern that the study proves the vaccines impair sperm quality or may have a lasting effect on fertility.

Elevated immune activity—particularly fever—in response to vaccination and infection may cause a short-term decline in sperm count. Multiple studies, including the study in question, have found no long-term impact on sperm count or fertility following COVID-19 vaccination.

A video baselessly claims that COVID-19 vaccination reduces breast milk production, resulting in the formula shortage in the U.S. The video was viewed over 17,000 times before it was flagged for containing false information.

One study found that a small percentage of COVID-19 vaccine recipients experienced a brief reduction in breast milk supply immediately after COVID-19 vaccination, but it was fully restored within 72 hours of vaccination. The formula shortage resulted from a plant closure and product recall due to contamination.

A flawed study that is recirculating on social media claims that an increase in emergency calls for cardiovascular events in people under age 40 appears to coincide with the rollout of COVID-19 vaccines in Israel. The study was widely shared on social media when it was first published in April and is once again being shared with the misleading claim that it proves that COVID-19 vaccines cause cardiovascular issues in young adults.

A far-right website known for publishing anti-science conspiracy theories published an article that falsely claims that the effectiveness of the Pfizer COVID-19 vaccine in clinical trials was "massively overstated." Similarly, a social media post with over 11,000 engagements says that the Pfizer vaccine has “horrifically poor” efficacy in young children.

Both posts base their claims on misinterpreted Pfizer data. The claim that the vaccine’s efficacy is lower than previously reported resulted from including suspected COVID-19 cases rather than only confirmed cases in the efficacy data. Pfizer data show low efficacy against infection in young children after the first two doses and higher efficacy after the third dose. For this reason, the Pfizer vaccine will be administered as a three-dose series in children under age five. Continuing to explain that the COVID-19 vaccines are effective in preventing severe disease, hospitalization, and death is recommended.

The 2020 death of a former pharmaceutical worker and prominent anti-vaccine activist at age 44 is being discussed online with speculation about her cause of death. The activist, who founded an anti-vaccine website, wrote a year before her death that, if anything happened to her, “it’s foul play.” Shortly after her death, conspiracists began claiming that she was “murdered by Big Pharma.”

While any death is tragic, there is no evidence of any foul play. Emphasizing that government health authorities investigate all claims of reported injuries or side effects after vaccination is recommended. In this case, the death was investigated and determined to be caused by pulmonary thromboembolism, a blood clot blockage in a lung artery. The activist’s death is being used to fuel distrust in vaccine manufacturers and, by extension, vaccines.

Two social media posts from people who have previously promoted misinformation about the safety and necessity of COVID-19 vaccines used CDC data about myocarditis to suggest that the risks of COVID-19 vaccination and boosters outweigh the benefits. Between them, the posts have received over 10,000 engagements.

An image shared on social media purportedly shows a post from a U.S. senator in which he claims to have evidence that COVID-19 vaccines are “harming and killing people.” There is no record of the senator making the post, and a spokesperson for the senator confirmed that the image is fake.

Bad actors online often doctor and manipulate images and social media posts in order to spread misinformation. Emphasizing that the COVID-19 vaccines are safe is recommended, as is highlighting the misleading tactics often deployed by vaccine opponents.

A social media post with nearly 57,000 engagements claims that Pfizer documents show that the company covered up vaccine-related heart damage in teens.  The post does not clarify where in the documents the claim can be found.

There is understandable and widespread concern about the potential for rare side effects after child vaccination. Responding with empathy and acknowledging the concerns of parents is recommended, as is explaining how vaccination will help protect both children and their families. Informational materials may also emphasize that vaccines have been rigorously tested to make sure that they are safe for all vaccinated individuals, including children, and that adverse side effects are extremely rare. Reminding people that millions have died from COVID-19 and that the vaccines are our best way to keep more people from dying is also recommended, as is explaining that a child is at a much higher risk of myocarditis from a COVID-19 infection than they are from the vaccine.

A widely shared social media post promotes the conspiracy theory that COVID-19 vaccines are being used for population control. The post references Pfizer documents but does not cite any specific report as evidence for the claim. The post has been shared nearly 5,500 times and has over 20,000 total engagements.

There is nothing in the Pfizer FDA documents to support the baseless claim that the COVID-19 vaccine is population control. Conspiracies have persisted for decades that vaccines are being used as a tool to control or harm people. Experts agree that depopulation conspiracies circulating in communities that have experienced unethical medical research or experimentation can only be combated by first acknowledging that serious abuses have occurred in the past and that these abuses are what led to the safeguards that exist now. Continuing to emphasize that COVID-19 vaccines are safe and rigorously tested is recommended, as is explaining that the vaccines work to prevent severe illness, hospitalization, and death.

A website run by an economic forecaster is using a misleading video clip to falsely claim that a Bayer Pharmaceutical executive said that the COVID-19 vaccine is gene therapy. The clip originally began circulating in November but has resurfaced recently among vaccine opponents. In the video from last October, the executive speaks about technological innovations, using the mRNA vaccine as an example. He compared the vaccines to innovative treatments that Bayer is developing, including certain types of gene therapies, but misspoke when he referred to the COVID-19 vaccine as an example of these gene therapies.

Despite continued debunking, this misinformation continues to circulate around the world. Explaining that mRNA vaccines cannot be considered gene therapy because they do not replace or alter genes is recommended. Reminding people that millions have died from COVID-19 and that the vaccines are our best way to keep more people from dying is recommended as well.

Alerts are categorized as high, medium, and low risk. 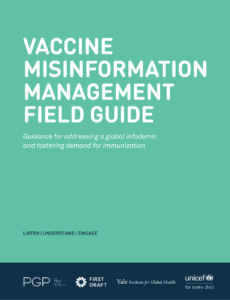 Get practical tips for addressing misinformation in this new guide. Click image to download, or see highlights.